In Croc 2, it is shown that there are Gobbo Kingdoms outside of the Gobbo Archipelago, each with their own monarchs. 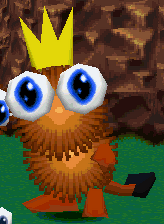 King Rufus is the king of the Gobbo Archipelago.

He is the one who took care of Croc after the young crocodile washed up on his island. He raised Croc, along with the rest of his gobbo citizens, before he was captured by Baron Dante. After Croc saved him and the others, he put up a statue of Croc in the center of the island.

He went on to marry Princess Tara, asking for Croc's help once again with Baron Dante, who returned twice. 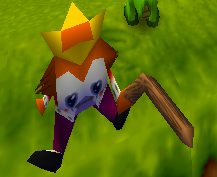 Sailor King, is the proud ruler of the Sailor Village. He loves to fish.

"This simple leader of the Sailor Gobbos leads a simple life. He loves fishing but always throws the fish back, but not before giving them a kiss."

Caveman King is the king of the Caveman Village. He loves toasting Ginger marshmallows over hot lava. He wears a crown made of bone, a robe made of animal skins, and carries a bone. He often stands near a river of lava.

The Inca King is the king of the Inca Gobbos in Croc 2. He wears a crown and a purple suit with a jewel necklace. Compared to the other Kings, his speech is more advanced. At the end of the game, he appears one last time to say goodbye, along with the three other kings. He rules the smallest kingdom, with only two levels.

Retrieved from "https://croc.fandom.com/wiki/Monarchs_in_Croc_2?oldid=19622"
Community content is available under CC-BY-SA unless otherwise noted.