Save the Ice Trapped Gobbos!

This is a fairly challenging stage. From the start, turn left and find the Gummi Placeholder in the corner. Use a Blue Gummi and bounce up to the ledge above. Smash open the first crystal crate, then jump across the gap behind the wall to reach a second crate. Return to ground level and smash open a crystal crate here, by the edge of the right Lava Pit. Move up between the two Fire Dantinis. You must complete each side of the stage here by climbing past the Fire Dantinis in turn before then center doors ahead of you will open. To get past one of the Fire Dantinis, stand facing him, then wait for both Fire Dantinis (the one in front of you and the one behind you) to have fired over your head before jumping up and tail swiping your target. Jump up the remaining columns and over the Breakable Box to reach the far ledge, then enter the doorway.

From first room - left side

After a taunt from Roger, run forward to pick up the TNT Crate. The race to the exit is fairly straightforward; simply jump across the hazards as you come to them, and follow the direct path. This may be the first time that you encounter plummeting floor sections. The disjointed flooring will collapse shortly after you step on each piece; here, you can run straight over them, or jump to each for greater safety.  Go up the tunnel at the far side of the pit. Press [Square] to throw the TNT Crate at the door once you reach the end. You didn't miss any crates or crystals or anything like that, so go straight ahead through the door.

In the next room, you have a series of Timers to beat as you race along the walkway. To complicate matters, if you want to collect all of the crystals, you have to do this within the time limits given as well (you might think that you can retrace your path after the final Timer is deactivated, but the lifts that carry you down will then go back up and become unreachable to you, leaving you stranded).  At the very start, while Roger is talking and before the countdown begins, head left and smash open the first crystal crate. Next, jump to the walkway and run along it. Jump across the corner past the Fire Dantini, rather than fighting him (though that works too).  Watch for the round Timer in the ground on the left, and stomp on it to deactivate it. Return to the path and keep running. At the first left branch, go up and quickly jump on top of the crate to smash it and get the GREEN CRYSTAL. Go straight to the tip where the next Timer awaits your stomp, then go along the nearby side branch. Jump to the round lift, ride it up, then jump straight ahead to the next level of the walkway. Run along the full length of it, jumping across the plummeting floor sections, to the Timer at the very end. Stomp that, then return to the most recent junction and head out to the second lift. Turn left as you rise and jump across the plummeting floor section here, then left on the solid walkway to stomp on the final Timer. You may now take your time advancing to the next Fire Dantini. Eliminate him, then free to Gobbo over the Bomb Crate to the left by touching him. Continue along the main walkway, jump over the floor sections, then hop into the Well to return to the starting room.

From first room - right side

Jump up past the Fire Dantini and enter the tunnel.  It's another TNT Crate-carrying section. Walk into the TNT Crate to pick it up. Run along the path, jump over the Breakable Box, then up to the door and press [Square] to throw the TNT Crate at it. Enter the next room.

Here, you have a limited amount of time before all of the Exploding Crates in the room go sky-high, but it doesn't mean certain death for you, just the inability to reach all of the crystals, so hurry up anyway! Jump across the Exploding Crates as you would any other disappearing platform. Back on solid land, jump to the tied-up Gobbo to free him, then jump ahead off the Breakable Box before it, well, breaks. Quickly leap to the next floating island ahead with a crystal on it, then across the last Exploding Crate towards the Well. There is a side path with two very small islands over a tunnel of Lava, which you would need to take it you didn't cross the last Exploding Crate in time.

Back in the central room, you can now advance through the main door. Smash open the crystal crate on that side before you do.

Strike the Checkpoint Gong, then check out the room. If you're very attentive, you'll notice a ledge over top of the entrance to this room. To reach it, you must hop on top of the frame holding the Checkpoint Gong, then jump to the ledge. There, you'll find a Heart, and further in a crystal crate and the BLUE CRYSTAL. Return to the floor. Once again, there are pathways to the left and right that you must complete before the main doors ahead will open. Let's start with the left again.

From second room - left side

Jump to the crystal crate on the island and stomp it open, then jump towards the Fire Dantini. Wait for him to shoot over your head, then jump over the Breakable Box and take him out. Continue jumping up to the ledge and enter the doorway.

This is pretty much the same as the last TNT Crate areas, with the added hazard of a small Lava Pit in each tunnel to jump over, and a large Rolling Barrel that you must get by. Wait for it to roll past you freshly before running past it. Toss the TNT Crate at the door at the end to open it.

From second room - right side

Jump up to the doorway past the Fire Dantini. Grab the TNT Crate, then run up the tunnel, jumping over the small Lava Pit near the end. The swinging Fireballs are over the first and last islands; the perspective is a bit funny, but trust that you're safe on the largest, middle island. Pause there a moment to get your timing right for the next jumps. Jump over the Lava Pit in the second tunnel, then throw the TNT Crate at the door and head on through it.

In the next room, jump to the Driving Platform. It will float in whatever direction you face.  You must maneuver it to collect the crystals, without getting caught in the periodic Steam Jets that shoot out of the columns. But note that if you do get hit, you merely lose a Heart, but you don't get killed outright, so you can still continue in this section. Once you've got all of the crystals, jump off the Driving Platform at the far end. Jump to the Breakable Box to nab the Gobbo, then jump into the Well to return to the main room.

Break open the crystal crate on the ground before you exit, if you haven't done so already, and enter the final room.

To your left, you'll find the Clockwork Gobbo Point, so pull one out of your inventory and use it.

And now, in this final room, you again must complete both side paths before the exit straight ahead will open.  Jump up to the walkway, where the YELLOW CRYSTAL is sitting at the crossroads. If you've been collecting all of the Coloured Crystals, then the Golden Gobbo Teleportation Orb will appear ahead of you.

At the crossroads, again take the left branch, and enter the doorway after a long jump.

From final room - left side

Instead of carrying a TNT Crate, you must race a Fuse along the path to the end. It will blow up several Exploding Crates along the way, so be sure to reach them before the Fuse does. Go up the tunnel, jumping over the two Lava Pits. In the next room, jump up the three Exploding Crates (if you don't reach them in time, the path to the right takes you up to the top, but it takes much longer). At the top, go through the tunnel directly ahead of you and jump over the tiny islands past the Lava. Jump to the winding walkway, then to the Gobbo on the extremely large TNT Crate at the end. Jump into the Well before the Fuse reaches the TNT Crate, if you don't want to lose a life.

From final room - right side

This one is another Fuse chase. Run up the tunnel, then jump across the Exploding Crates and floating platforms over the Lava Pit (there's also a side path that takes you to the top, but it takes much longer). At the end, run by the Gobbo to free him, then keep going straight and jump into the Well before the big TNT Crate explodes.

After that, just go straight up from the crossroads past the last Fire Dantini to the final showdown with Roger... which turns out to be quite short. 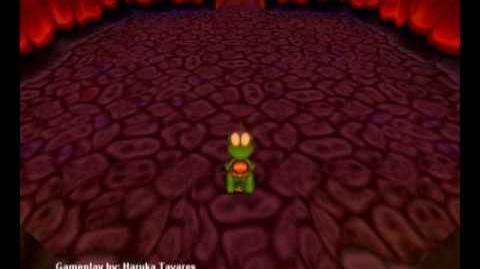 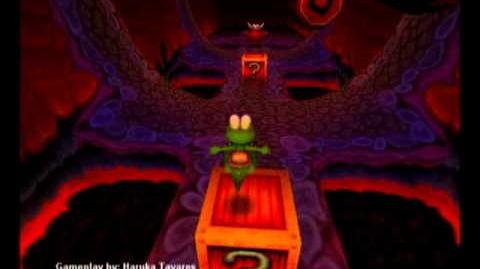 Yippee! An image gallery for KaBoom! It's Roger Red Ant is available. Click here to access it.

Retrieved from "https://croc.fandom.com/wiki/KaBoom!_It%27s_Roger_Red_Ant?oldid=16776"
Community content is available under CC-BY-SA unless otherwise noted.