The Gobbos are a race of cute little fuzzballs native to Forest Island and the Mainland. They are the creatures that rescued Croc. The Gobbos are ruled by several different kings, each king ruling a portion of Gobbo land. The king of the Archipelago Gobbos, which inhabit the Forest Island in The Gobbo Archipelago, is named King Rufus, while the names of the different kings of the Mainland are unknown. We can, however, refer to them as the Inca King, Caveman King, Sailor King, etc. There are four tribes of Gobbos in Croc 2: the Sailor Tribe, the Cossack Tribe, the Caveman Tribe, and the Inca Tribe. Each of the tribes is preoccupied with a certain culture which is reflected in their environment.

These Gobbos have little or no clothes, are showing their tails, appear to have cultures of their own, and are brown in color.

An ancient ritual, at the start of every new year, the Gobbo high priestess would announce which kitchen utensil would bring them good luck if put down the front of their pants/trousers (even though it has been proved that Gobbos wore nothing). Only a few years are known by modern Gobbos. They are:

The Gobbos have been known to invent certain objects, and some of their best were:

The mainland Gobbos have no tails or are hiding them, they wear clothes, and they seem to mimic different groups and races of humans, and are an orange color. They also appear to be much larger than islander Gobbos (easily two feet taller). This is evident when in Croc 2 the Mainland Gobbos are almost as tall as Croc, while in Croc: Legend of the Gobbos, the Gobbos are only a third of Croc's height.

The Mainland Gobbos have a hierarchy which the Gobbos there strictly adhere to. The King of the village is the leader of the village, with his subjects being at the second highest level. Below them are the normal Gobbos.

Like the islander Gobbos, the mainland variants are able to speak, and seem more adapted to a language than their islander counterparts. The gibberish "voices" for the Gobbos and other characters in Croc 2 were created from recording words in English, and then chopping them up and mixing them around in order to achieve a 'babbling' effect.

See: Sailor Village Sailor Gobbos are the first of the mainland Gobbos that Croc encounters. They import Ginger Soda from outside sources, and enjoy boat races and fishing.

See: Cossack Village Cossack Gobbos are the second of the mainland Gobbos that Croc encounters. They are fun loving Gobbos with the knowledge to create a working train.

See: Caveman Village Cave Gobbos (also known as Caveman Gobbos) are the third of the mainland Gobbos that Croc encounters. They are mostly more primitive Gobbos, though they do have a Gobbo who acts as a car mechanic.

See: Inca Village Inca Gobbos are the fourth and final of the mainland Gobbos that Croc encounters. They are considered to be the oldest and wisest of all Gobbos.

See: Cowboy Village There was to be a fifth Gobbo Village in Croc 2, with a western theme. It would have been inhabited by Cowboy and Native American Gobbos. Unfortunately, it did not make it into the final game, it was cut out early in the development for an unknown reason. Although these Gobbos were not in Croc 2, a Cowboy Gobbo did make it into several official artworks for Croc 2. It was most likely at first planned to be in the game, but was scratched very early on in the development because it isn't featured in any screenshots or videos of Croc 2.

"Gobbos are small furry creatures who inhabit Forest Island where Croc was found. They live a mostly peaceful life, with only Baron Dante and his minions causing them harm." 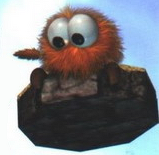 Add a photo to this gallery
Retrieved from "https://croc.fandom.com/wiki/Gobbo?oldid=19664"
Community content is available under CC-BY-SA unless otherwise noted.