Unlike Croc: Legend of the Gobbos, Croc 2 isn't quite as heavy with unused content. Most of the unused content for Croc 2 is from a few pre-release pictures that have been found. But recently more discoveries have been made, including a test level.

In this advertisement an underwater level is glimpsed, along with a flying level that does not take place above clouds.

A swimming level was going to be included in the Caveman Village, much like the original game. This was removed in the final. 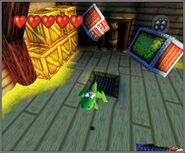 The level
Add a photo to this gallery

An early demo shows a completely different title screen. This same demo contains the unused water level, possibly entirely playable. The model has since been extracted.[1]

The menu
Add a photo to this gallery

An early group shot shows some unused Dantinis, the unused Cowboy Gobbo, the unused monkey enemy and Baron Dante with both eyes.

An advert in a magazine also used some of these characters.

Retrieved from "https://croc.fandom.com/wiki/Croc_2/Unused_Content?oldid=19732"
Community content is available under CC-BY-SA unless otherwise noted.