"Who are you?! Hmmm. Not look like Dantini!"
This article is about the character. For the level, see Cannon Boat Keith.

Cannon Boat Keith is a large, purple Pirate Dantini and the second boss in Croc 2. The player must confront him in his level after completing all the levels in the Sailor Village in order to progress to the Cossack Village.

"The feared Pirate King Cannon Boat Keith is one of the Gobbos more feared enemies. He has become even more bitter and twisted since he lost his leg and hand in a bizarre gardening accident." - Croc 2 Bio

In appearance, Cannon Boat Keith is a large, purple Dantini. As he is pirate-themed, he wears a pirate captains attire, down to a pegleg, eye patch and hook hand. He is seen with two Skeleton Dantinis in the cutscene that introduces him, and also usually has a green parrot perched on his shoulder.

Cannon Boat Keith's parrot, along with Keith himself, are featured in nearly every Croc 2 artwork, including the cover. When Croc defeats Keith, Keith falls off of his boat into the mucky water below. When he falls, his green parrot flies off. It is unknown where it goes. 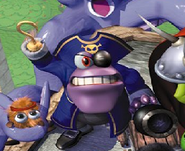 Add a photo to this gallery
Retrieved from "https://croc.fandom.com/wiki/Cannon_Boat_Keith_(Character)?oldid=17908"
Community content is available under CC-BY-SA unless otherwise noted.