Not to be confused with And so the Adventure Returns, the first level of the Crystal Island.

1-1 And so the Adventure Begins

1x Worm in a Well

And so the Adventure Begins is the first level played chronologically in Croc: Legend of the Gobbos, and the first level on Forest Island. As with all the other normal levels in the game, there are six Gobbos that need collecting and a Crystal Door Challenge at the end of the level. This is also one of the few levels that feature a secret Bonus Area. See below for more details. 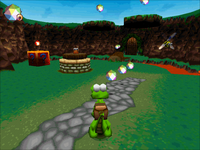 Collect the three Crystals ahead of you at the beginning of the level. Then on your left jump on on the Well and collect the first Gobbo. Turn to your right and jump to grab onto the first floating Platform along with the Crystal on top of it. Jump on the other Platform and collect that Crystal. It is recommended to Tail Attack Jonnie Bee Goode if you are concerned about it hurting Croc. If you wish to enter the Bonus Area containing 3 Lives, stomp on this platform three times to trigger a sparkling animation which transports Croc to an isolated part of the level.

The arena is set on a cliff containing 12 Crystals, 3 Smash Boxes which each contain a Life, and a set of Sparkling Stars which, when touched, will end transport Croc back to the first part of the level. Upon returning, the Bonus Area cannot be reached a second time until the level is restarted.

After touching the Sparkling Stars, Croc will return to the first part of the level. The platform which transported Croc is no longer visible to prevent Croc from returning to the Bonus Area. Jump on the Well and stomp on it to enter the second arena of the level.

The arena consists of a cave containing Lava, Fireballs and several items. Collect the 3 Crystals on your left and 3 more Crystals on your right as you enter. Then collect the blue Coloured Crystal atop the Smash Box and stomp on it to collect 5 Crystals. To reach the next part of the cave, time your jump on the moving Platform and jump off it again to the other side when it is close enough. Be wary of the two Fireballs which occasionally jump out of the Lava and cross the path. It is recommended to stay as close to the center of the island as possible, as they do not cross that path. Collect the three Crystals and jump across the two Unstable Platforms before they break. At the end of the cave is a Life upon a Smash Box. Collect it and stomp on the Smash Box to recieve the second Gobbo. Return back to the first part of the level by exiting the cave through the same way until reaching a platform at the end, which will take Croc back up to level ground.

Croc returns to the first part of the level a second time. Turn around and collect the red Coloured Crystal and stomp on the Smash Box to collect 5 Crystals. Go up and Tail Attack the red Dantini and jump over the small rock to collect a Crystal which is actually disguised as the pink Coloured Crystal. Run back to the Log which Croc can use as a safe passage across the Lava Pit, collecting the 3 Crystals atop it followed by entering the set of Doors to enter the next part of the level. At this point you should have 40 Crystals, the Red, Blue and Pink Coloured Crystals, 2 Gobbos and 6 Lives, if you have not yet lost any Lives or Crystals.

The next arena contains several Lava Pits, Fireballs and Platforms. Ahead there is one pit with a Fireball which occasionally jumps out of the Lava. Time your jump over the Lava Pit to avoid getting hurt by the Fireball, then follow the path and collect the 6 Crystals. Ahead is a larger Lava Pit with two Fireballs. Jump on each Platform but again, time your jumps onto the higher Floating Platforms. Collect the Crystals, of which there are 5, as well as the green Coloured Crystal atop an Unstable Platform. Collect the 3rd Gobbo atop the Smash Box at the end, stomp on it to receive 5 Crystals and leave through the next set of Doors. You should now have 56 Crystals, the Red, Green, Blue and Pink Coloured Crystals, 3 Gobbos and 6 Lives.

The next arena contains two Smash Boxes straight in front of Croc. Stomp on them to collect 5 more Crystals in each, then walk over to the right. Do not Tail Attack the Beany Gong unless you have been unable to collect all 5 Coloured Crystals for whatever reason and have explored all accessible locations within this walkthrough including the below sections. Swiping it will end the level. Be aware of the Burrowing Worm which will hurt Croc upon touching it even when it is underground. Time your jump onto the rock and make a careful leap onto the Floating Platform to collect the 4th Gobbo. Turn around and make another leap back to the ground, again timing it to avoid getting hurt by the Worm. Run to the other side of the arena to face another Well, only this time without a Stump, and be aware of a Worm in a Well which will pop out of it when Croc is too close. Upon doing so, back away from the Worm quickly but only far away from it enough to avoid getting hurt. When it retreats, jump into the Well to access a cave arena.

This arena contains a large Lava Pit and several Unstable Platforms. Jump on each one, quickly but carefully, as well as collecting the 2 Crystals. At the end are 2 Dantinis which you can Tail Attack in order to jump up onto the floating Smash Box to collect the final yellow Coloured Crystal. Stomp on the Smash Box to receive the 5th Gobbo and proceed out of the cave. You should now have 5 Gobbos, all 5 Coloured Crystals, 6 Lives and 57 Crystals. If you do not have all 5 Coloured Crystals, walk to the other end of the arena and Tail Attack the Beany Gong to end the level. If you do, proceed towards the purple Crystal Door.

This arena contains two isolated cliffs so be aware not to fall off the edge. Go to the left and jump on the Jelly to collect 4 Crystals, then go to the right to jump on the other Jelly, collecting 3 Crystals and a Silver Key. Proceed towards the purple Balloon and jump up to hold onto it, transporting Croc to the other cliff. Touch the Cage to free the 6th Gobbo within it, and before using Tail Attack on the Gong to end the level, look behind the rock on the right to collect a final Life. If you have successfully followed the walkthrough without getting hurt, you should have ended the level with 6 Gobbos, 7 Lives and 77 Crystals.

The following tracks from the game play in this level:

Yippee! An image gallery for And so the Adventure Begins is available. Click here to access it.

Retrieved from "https://croc.fandom.com/wiki/And_so_the_Adventure_Begins?oldid=19030"
Community content is available under CC-BY-SA unless otherwise noted.